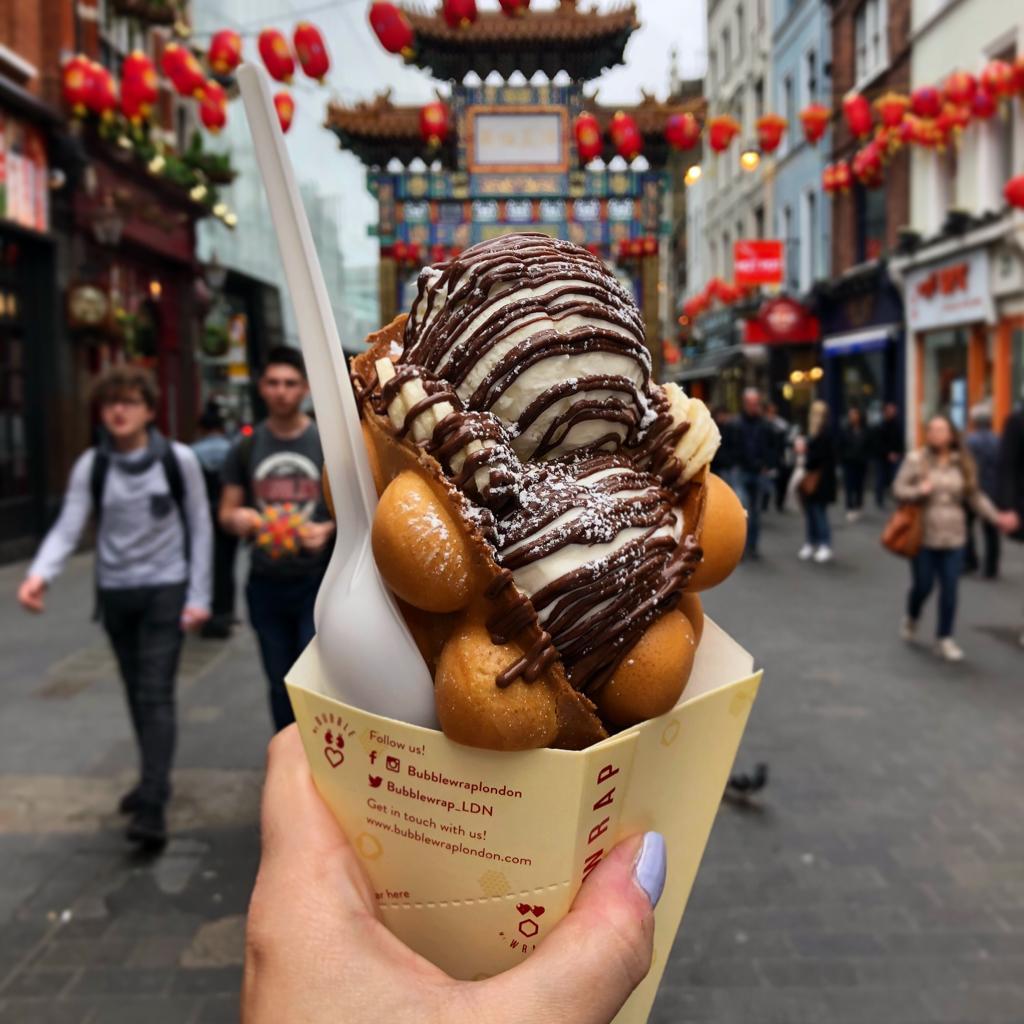 You’ve probably seen pictures of ice-cream or gelato in many of my blogs. I can’t get enough of the stuff! Always up for trying new flavours, I do have a few favourites though that if I see them, I find it hard to resist; white chocolate and coconut, in particular. Here’s my wrap-up of the best ice-cream and gelato I’ve tried around the world in 2018.

I’d love to know where your go-to places are for gelato, ice-cream or sorbet. Let me know!

They say home is where the heart is and I’ve grown up with Fusciardi’s in Eastbourne. I visited last week on a trip back home and went for the honeycomb, which was creamy and delicious. The Snickers flavour looked pretty tempting too!

Mmmm the best ice cream in Eastbourne comes from Fusciardi’s. Been coming here since I was a kid. Used to have the vanilla and strawberry mixed Mr Whippy but upgraded to their proper stuff. This is honeycomb. 😋 #visiteastbourne

Unfortunately I didn’t catch the name of this place but it’s an ice-cream stand just opposite the Berlin TV Tower. It was a very hot day and I really wanted something fruity and refreshing so I went for the raspberry flavour gelato. I’d only had raspberry sorbet before but raspberry gelato is even better! Mmmm!

Mmmmm! This was delicious and ultra refreshing – plus gelato in Berlin is a bargain. Only 1.50 for a scoop. Raspberry flavour – mmmmm mmmm mmmm! 🍦

This place does proper old school ice-cream sundaes and they are pretty rich but pretty damn tasty too! I went for banana and vanilla with a hot chocolate fudge sauce. I didn’t need to eat for the rest of the day!

This is probably the biggest ice cream I’ve ever had! I often find it difficult to settle for just one scoop and this place, close to the Shambles in York, had so many unusual flavours that I had to go for the double scoop cone – and it was huge! The custard cream tasted more like vanilla but the white chocolate cherry bon bon was the bomb.

Probably the biggest ice cream I’ve ever eaten! Me and G could have shared one but instead we went for one each 🤦🏻‍♀️ This was custard cream and white chocolate cherry Bon Bon. The custard cream tasted more like vanilla but still, pretty good! 🍦

This place is ultra instagrammable in the adorable Montmartre district of Paris. This year, I was lucky enough to be visiting on the day France won the World Cup and the atmosphere was unreal. This cup includes a scoop of grapefruit sorbet – probably the best sorbet I’ve ever had – and coconut gelato.

Mmmmm! Gelato and sorbet! This was grapefruit sorbet, which was amazing. Plus coconut gelato. Always a sucker for gelato. 🍦

Mercato Metropolitano is the best place to go in London in summer if you’re in the mood for amazing street food, all the gin, craft beer and cocktails, plus gelato. This pop-up food area, close to London Bridge, didn’t disappoint on the gelato front. White chocolate and blackcurrant sorbet – a brilliant combo.

Had to finish the day with a gelato at Mercato Metropolitano yesterday. This is blackcurrent sorbet and white chocolate. Mmmm! 🍦

An ice creamery for adults in Austin. Most of the flavours here are boozy and pretty hardcore booze but the sangria sorbet was right up my street, and very refreshing on a sunny February weekend!

This place might have ice-cream in its name but it actually specialises in gelato made fresh on-site. Located in Bristol’s Cargo area by the waterside, I opted for a cup with white chocolate and marshmallow.

Oh my gosh. Bristol do gelato well! This is marshmallow gelato one side and white chocolate the other. Apparently gelato has a lower fat content than ice cream and because of this, it brings out the flavours more. You always learn something new on a food tour! 🍦

I lived close to this place during my stint in New York but being winter, ice-cream wasn’t always what you fancied eating. Who am I kidding? Of course, it was. There are a few of these about but this one was on the Lower East Side and the flavour is peanut butter marshmallow crunch. It wasn’t overly sweet – good job, as the single scoop was huge!

My last ice cream of New York. Van Leeuwen on Ludlow Street, Lower East Side. This was literally over the road from me but I only tried it on my last weekend. This is peanut butter marshmallow crunch. 🍦 #icecream #gelato #vanleeuwen #vanleeuwenicecream #food #foodporn #foodie #foodieinsider #nom #ongooglemaps #newyorkcity #newyork #newyork_ig #igersnyc #nyc #nycfoodie #wanderlust #TakenWithXperia #traveller #travelgram #travelphotography #travel

Find this place in the bunting-dressed Brighton Lanes. It definitely beats a Mr Whippy on the seafront. Too many flavours to choose from left me ending up with a double scoop cone filled with avocado and banana & nutella. It was divine!

Mmmmm. Gelato Gusto. Banana & Nutella and Avocado. So scrummy and just what I needed for my itchy throat. 🍦

This has been one of my highlights in 2018! This time, I couldn’t hold it at two scoops, I had to go for three! Lemon sorbet, panna cotta and mango gelato. Wowzer. The panna cotta was unreal – one of my favourite ice-creams this year – and topped with a waffle – and with chocolate drizzled into the bottom of the cone. It’s worth waiting in the queue for this place.

In prime position on Abbot Kinney Blvd, Salt and Straw is a must-visit in LA, especially if you’re staying on Venice Beach. I went for a cup filled with avocado and chocolate fudge – mixed together. It was surprisingly good!

This place is on the corner of the instagram-famous Mermaid Street in Rye on the south coast of England. After a day enjoying the beach front and town, we ended up enjoying a yummy ice-cream in the sun. I went for banana flavour – so good!

I’m sure you’ve seen these on Instagram; the oh-so-pretty bubblewrap waffles found in London’s Chinatown. I’d tried to go on a weekend but the queue was down the street so I headed back on a quiet week day afternoon to concoct this beauty. Vanilla and coconut gelato with nutella and banana topping.

Finally! Finally I got to try this and get my insta pic. Vanilla gelato and coconut cream gelato in a bubble wrap waffle with banana and Nutella drizzled on top. Well, it is my bday after all! 😋 #bubblewrap #bubblewrapwaffle #chinatown #chinatownlondon #london #lovegreatbritain #loveuk #visitengland #visitlondon #london #londonpop #londonfood #londonfoodie #foodie #foodporn #gelato #wanderlust #ongooglemaps #travel #traveller #travelphotography #travelblogger

This place was my gelato stable while I lived in New York. A proper ice-cream lab serving some of the city’s top restaurants, it’s open until midnight each night making it constantly tempting. They do the best avocado ice-cream and this cup also contains a sprinkle-filled vanilla birthday cake flavour. Yum yum yum!

Clotted cream caramel ice-cream. This was a naughty ice-cream in a rainbow sprinkled cone but very much deserved after a 30-mile cycle through the New Forest!